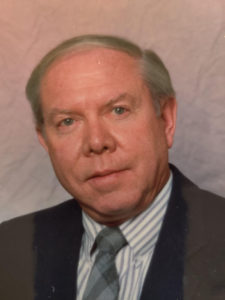 William Howard Hawkes of Kaysville, Utah peacefully passed away with his family by his side on March 12, 2020 at the age of 87.

He was the first-born child of William Ariel and Genevieve Thomas Hawkes in Preston, Idaho, in the home of his paternal grandparents on February 25, 1933.

All of his school years were spent in Preston, Idaho. He attended BYU and graduated from Utah State University with a degree in Civil Engineering. He married Colleen LaPreal Pearson of Mink Creek, Idaho, in the Logan, Utah LDS Temple on June 8, 1956.

He served faithfully in various positions including Guest Services Missionary at Temple Square, priesthood pianist, missionary in the Eastern States Mission, temple ordinance worker in the Bountiful, Utah LDS Temple, bishoprics, bishop, stake high councils and stake presidencies in the Church of Jesus Christ of Latter-day Saints. He was a missionary until the very end.

He was a true friend and was happiest being with family and friends.  He dedicated his life to serving others and loved to make people happy. He was known for carving willow whistles. He will be fondly remembered for his endearing sense of humor.

He is preceded in death by his parents, infant brother Nathan, granddaughters Olivia and Camille and great-grandson Andrew.

Due to COVID-19 mandates, a private graveside service will be held for family members.  Interment,  Kaysville City Cemetery.

A memorial service will be held at a later date.