FILE – This Nov. 29, 2018, file photo, shows the Transient Test Reactor at the Idaho National Laboratory about 50 miles west of Idaho Falls, in eastern Idaho. The chairwoman of the U.S. Nuclear Regulatory Commission says the resurgence of interest in nuclear power as a clean energy source can be boosted by emphasizing how it will help a wide range of humanity. Kristine Svinicki on Wednesday, Oct. 14, 2020, told an Idaho governor’s advisory group that non-traditional nuclear energy backers could be drawn to the idea if it’s made clear how nuclear energy can combat global poverty and help advance opportunities for women. (AP Photo/Keith Ridler, File)

The money spread over 10 years will pay for one-time costs Utah Associated Municipal Power Systems has in developing and building the commercial reactors.

Officials said the money will lower the cost of energy produced by the reactors, making it competitive in the marketplace and reducing the financial risk for the energy cooperative.

The first-of-a-kind project is part of an Energy Department effort to reduce greenhouse gasses by using nuclear power to complement intermittent renewable energy such as wind and solar power.

“The ideal world for utility companies and their customers, and the most cost-effective, are portfolios containing a high percentage of low-cost renewables, backed up by stable, carbon-free nuclear energy that is available 24 hours a day, 365 days a year,” Douglas Hunter, the energy cooperative’s chief operating officer and general manager, said in a statement.

The money is going to Carbon Free Power Project, which is owned by the energy cooperative. The project involves 12 small modular reactors each capable of producing 60 megawatts, or 720 megawatts when all 12 reactors are operating. 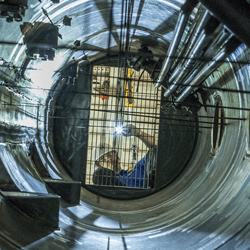 The energy company plans to buy the reactors from NuScale, then assemble them in Idaho. The first small modular reactor is scheduled to come online in 2029, if regulatory agencies approve, with 11 more to follow in 2030.

The reactors would operate at the Energy Department’s 890-square-mile (2,300-square-kilometer) site that includes the Idaho National Laboratory, a nuclear research facility that would help with the development of the reactors.

The energy cooperative said energy from the reactors will replace that of coal plants nearing the end of their life cycles. The cooperative said its Carbon Free Power Project has so far signed up 33 member utilities in five states, with more expected to join. Overall, the cooperative has 47 members in Utah, California, Idaho, Nevada, New Mexico and Wyoming.

There are currently just under 100 licensed commercial nuclear reactors operating in the U.S., generating about 20 percent of the nation’s energy, according to the Nuclear Regulatory Commission.