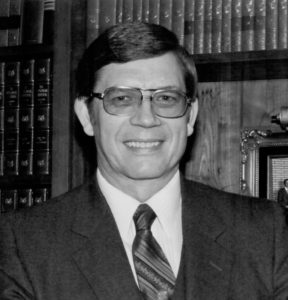 Tom was born on July 9, 1930 in Tremonton, Utah to Conrad Richard Steffen and Jewel McGuire Steffen. He was raised by loving parents who taught him the value of hard work and education.

He attended Bear River High School where he played football and baseball. As a young man he developed a wide range of skills and talents. In high school and college he was a champion boxer. He obtained the rank of Eagle Scout and was one of only two Eagle Scouts in the nation chosen to represent the Boy Scouts of America in a special convention in Hawaii.

Tom served as a full-time missionary for the Church of Jesus Christ of Latter-day Saints in the Canada West Mission. He was an active member of the Church his entire life and enjoyed serving in numerous callings.

Following his mission, he met and courted LaVona (“Vonie”) Ericksen Steffen. They were married and sealed in the Salt Lake City temple in 1953. They enjoyed a completely harmonious and loving marriage until Vonie’s death in 2015. They were married for 62 years.

Tom received his juris doctorate with honors from George Washington School of Law. He also served on the Board of Editors, George Washington Law Review. During law school, he and Vonie already had 4 children and Tom worked full-time as a contracts negotiator for the Bureau of Naval Weapons. He also worked as a policeman on Capitol Hill during law school. He had many sleepless nights during law school as he worked full-time and went to school full-time while Vonie chose to be a stay-at-home mother. Tom always recognized that raising a family full-time was a far more difficult and greater achievement than his career as an attorney and judge. He constantly told his family that his wife was responsible “for at least 60 percent” of anything he earned or any good he accomplished in his life.

Prior to going on the bench, Tom had a highly successful law practice. He was known as one of the most influential and consequential lawyers in Nevada’s history. In his years of private practice as a complex business litigator, he never lost a single bench or jury trial. He was then appointed to the Nevada Supreme Court by Governor Robert List in 1982. As a jurist, he labored over his opinions and took pleasure in finding precisely the right word or phrase. Litigants who came before the court in oral argument knew that Justice Steffen was always prepared. He retired from the Court in 1997. He then became ‘of-counsel’ at his son John’s law firm (“Hutchison & Steffen”) where they enjoyed many years together in the active practice of law.

Tom enjoyed life to the fullest with many different interests and passions. However, his greatest passions were three-fold: His family, his faith, and his work. Tom accomplished much in his life but continually reminded his children that his greatest accomplishment of all was his marriage and family. Everything else was, in his words, “Second Fiddle!”.

Ten years ago, Tom and Vonie moved to Hendersonville, Tennessee where their daughter Catherine (“Cass”) and son-in-law (Tod) took great care in assisting them in their elderly years. The entire family expresses sincere gratitude to Cass and Tod for the years of love and service they provided in caring for them.

Due to COVID-19 concerns, a graveside service will be held on Saturday, September 12, 2020 at the Brigham City Cemetery. Guests will be limited to family only.