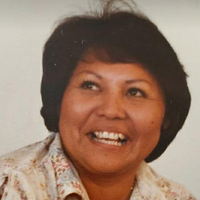 Sarah Tingey, 76; of Grace, Idaho passed away on Monday, March 16, 2020 at the Portneuf Medical Center in Pocatello, Idaho.

Sarah was born on September 12, 1943 in Brimhall, New Mexico the daughter of Navajo Jim Begaye and Rose Dawes.

She married David Deveral Tingey on August 29, 1963 in Gallup, New Mexico and they were later sealed in the Logan LDS Temple on May 8, 1970.

She was a member of the Church of Jesus Christ of Latter-Day Saints and was an active ministering sister.

Services for family and close friends will be held on Friday, March 20, 2020 at 11:00am at the Thatcher/Williams Ward Chapel, 2060 Niter Bench Road, Grace, Idaho. Burial will be in the Grace Cemetery.

Condolences and memories may be shared with the family at simsfh.com