Logan City dumps their recyclable materials in one of Mountain Fiber’s buildings to be separated into usable pieces.

LOGAN – Recycling business is struggling locally and across the country due to China’s refusal to take on the world’s junk.

Alex Bearnson, president and CEO of Revolve, had high hopes of making a business out of recycling when the world’s largest buyer of recycled materials shut their doors in September of 2019.

He said after 40 years China closed their doors to the world’s garbage when a new leader came into power.

“China had no environmental controls and a lot of what they couldn’t use ended up in the ocean, burned or buried,” he said. “We tried to find other markets when they closed off the market. We looked into Vietnam, Korea and India but no one was taking it.”

Bearnson said recyclable materials were the number one export as far as tonnage went in the U.S. for a long time.

The Utah State University business graduate understood the challenges of recycling before he started the business. He was well versed in how to profit from recycling. But when the market dried up, it wa time to do something different. Bearnson went into the real estate business.

The New York Times reported many municipalities are scraping their recycling programs and opting for burning their recycled materials in incinerators and converting waste into energy. Other cities are sending recyclables to the landfill with everything else.

Not so for Logan City, they get paid for their recycled trash. All of Cache County’s recycled material is sent to Mountain Fiber in Hyrum where it is processed and separated into different bundles.

“Logan City might be the only municipality that gets pad for their trash,” said Kim Allsop in the Mountain Fiber’s Hyrum facility. “We have been in the recycling business since 2003 or whenever Logan City started the program.”

Mountian Fiber turns the paper into insulation and bags it. They not only sell it throughout the intermountain area, but it is also used by their sister company Allsop insulation.

“If we didn’t use and sell the insulation we wouldn’t recycle,” she said. “We bundle up what we can’t use and find companies that will take it from us.”

Logan garbage trucks drive into large sheds and dump their loads on the cement floor. A loader pushes it up to a hug pile where employees separate the plastic, paper, cardboard and aluminum into different piles.

“Logan City brings us about 500 tons of material a week,” she said. “All of the curb side recycling picked up in the county comes here to be separated.”

Recycling is not very good now days as it is hard to find places that will take some of the plastics, Allsop said.

“We are an actual recycling facility. We use the paper, mix it with a fire retardant and turn it into insulation,” she said. “People put all kinds of stuff in their blue containers we can’t use.”

Allsop said glass is one that causes problems because the trucks dump their load on the concrete floor and the material is separated by hand. Broken glass causes safety issues. Workers risk getting their hands cut when they sift through the pile. 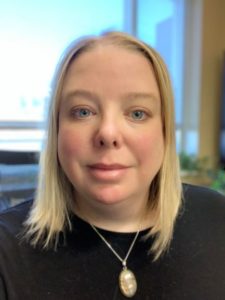 Emily Malik, the City of Logan Conservation Coordinator, is the city’s expert on landfill recycling, hazardous waste, and green waste in Cache County.

“The city has a limit as to what they can recycle,” Malik said. “So far, Mountain Fiber has taken everything we give them. “

She said some communities are struggling with what to do with cardboard and some plastics, but Logan is fortunate to have a place that will accept most of their recycled materials.