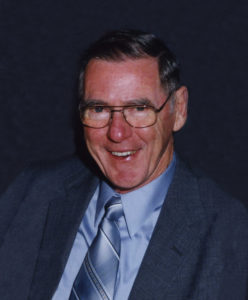 Raymond “Mack” French McQuain Jr. passed away peacefully on September 3, 2020 at home surrounded by his family.

Raymond was born in Ireland, West Virginia to Rista Davis McQuain and Raymond French McQuain Sr. on May 9, 1931.

Raymond was called to serve in Korea in 1950. After active duty he returned to school.

Raymond was a graduate of Oak Ridge High school (class of 1949), Tennessee Wesleyan University, University of Tennessee, and Akron University. Ray was a huge supporter of the Tennessee Vols.

Raymond was an active member of Community Presbyterian Church, serving as a Deacon, an Elder, and Clerk of the Session. He had a deep and abiding faith and spent endless hours serving on numerous committees. He was also active in the community coaching little league football, Board of Meals on Wheels, and Peach Days with the Shriners.

He enjoyed tennis, hiking, camping for a week to the Wind Rivers with friends, skiing, and snow shoeing, and the Utah Honor Flight accompanied by son-in-law Kyle Smith.

Preceded in death are his parents and two brothers, Eugene McQuain and James (Sue) Davis McQuain.

Private Memorial Services (family and close friends) will be held at Community Presbyterian Church, 311 South First East, Brigham City, Utah on Wednesday, September 16, 2020 at 11:00am. Military Honors will follow the service. There will be a celebration of Ray’s life at a later date because of the Corona virus.

Special thanks to Doctor John and Michelle Markeson and the Bristol Hospice team for the loving care they provided.

Memorial contributions may be sent to Community Presbyterian Church or your favorite charity.