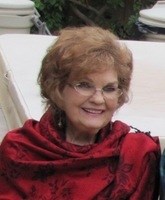 Patricia Ann Wells, beloved mother, grandmother and friend, passed away on May 16, 2020, at the age of 90. After many health challenges she contracted COVID-19 while in a Skilled Nursing Facility in Phoenix, Arizona.

Born February 8, 1930, in Bismark, North Dakota, to Rodney Lee and Grace Ernestine Wells. She was the fourth of five children and entertained her children with stories from her childhood.

She married Burrell F. Hansen in September 1949, and settled in Logan, Utah, where she lived for many years. She and Burrell welcomed LeeAnn, Kathryn, Tracey (Ben), Scott (Antonella), and Kerrie into their family. While raising her family, Patricia finished her Bachelor’s degree, earned a Master’s degree at Utah State University, and a PhD from the University of Arizona.

Patricia taught at Utah State University in the Speech Communications Department, where she directed many Readers Theatre Productions. She went on to teach at Mississippi State University and spent two years in Seoul, South Korea. She finished her career teaching English at Meisei University in Tokyo, Japan, where she lived for over a decade.

Life was challenging and exciting for Patricia. Although they later divorced, Burrell and Patricia spent a memorable year in Glasgow, Scotland, with their five children. She started her PhD at 45, and traveled the world while she worked in South Korea and Japan. She was active in the Tokyo International Players, where she both directed and acted. She welcomed the opportunity for adventure and she visited her children and grandchildren no matter where they were living, or she brought them to her, even in Japan.

She was loving and generous to all, both family and friends. She welcomed numerous foreign students into her home for holiday meals. Patricia was able to communicate with people from all walks of life, turning strangers into devoted friends wherever she went. She retired to Phoenix, Arizona, where she spent the remaining years of her life near her son Scott and his family, and her daughter Kathryn, who provided constant care in her later years during her many health challenges.

Patrica was a bright, creative person with a life-long love of the theater and the performing arts. She acted in and directed countless productions, often with the participation of her children, Kathy, Tracey, and Kerrie. She was a marvelous seamstress, sewing clothes for her children and costumes for her plays. She was an excellent cook and made wonderful cinnamon rolls. She passed down her love of the arts, and many of her skills, to her children. Always taking a role in the political process, Patricia became active with The League Of Women Voters when she retired to Arizona. She greatly enjoyed playing cards, cribbage, and dominoes with her family and circle of friends.

She is preceded in death by both her parents, her four siblings, and her former husband Burrell. She is survived by her five children, nine grandchildren, and five great-grandchildren, who will miss her warm, loving light and remember her always. Due to the current pandemic, a memorial service will be held at a later time.