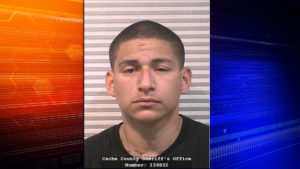 LOGAN — A 27-year-old North Logan man has been arrested on suspicion of stealing a UPS truck and other crimes. Hector L. Rojas was booked Thursday into the Cache County Jail.

According to a probable cause statement, deputies were called to Schreibers in Amalga earlier in the day, after the stolen UPS truck had been located there using onboard GPS tracking installed on the vehicle. They were told a Hispanic man in sweatpants, a dark jacket and a backpack was observed fleeing from the area.

Employees at the plant provided video surveillance from around the facility. It showed a man matching Rojas’ description, running from a nearby home. The resident of the home admitted that Rojas had been at her trailer behind the residence. She also showed deputies a photo on her phone, showing him standing in the field next to the stolen vehicle.

The police report stated that a short time later, Rojas was located in a field walking east into Smithfield. He was carrying a backpack that contained the keys to the stolen truck and a UHAUL truck that was parked at the UPS warehouse. There was also three financial transaction cards and methamphetamine inside.

Rojas was interviewed by deputies and admitted to entering at least two vehicles, taking the debit cards. He was taken into custody.

The probable cause statement said, deputies later learned of an assault that had occurred between Rojas and a family member. He reportedly threw a tire jack at the victim’s vehicle and flung metal cans at him. He also threatened two witnesses in retaliation for cooperating with law enforcement regarding the incident.

As deputies continued their investigation, they learned Rojas matched the description of a man suspected of breaking into a home Aug. 14. More than $730 in tools were stolen. Video of the burglary showed the suspect, who had the same tattoos on their arms as Rojas’.

Jail records show Rojas was booked on multiple felony and misdemeanor offenses. He is being held without bail.

Formal charges are expected to be filed Monday in 1st District Court.