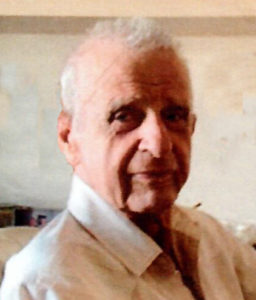 He was born March 26, 1922 in Smithfield, Utah to Thomas Henry and Katie Stone Gittins.

He was raised and educated in Smithfield, graduated from high school and enlisted in the U.S. Navy during WWII aboard the USS Chandler and the USS Little Rock. He was honorably discharged as a Seaman First Class. He was so dedicated and proud if his military service. We are so thankful for his commitment and sacrifice.

He married Verda in 1948 and she preceded him in death on May 28, 1979. They had a daughter Nancy and grandson, Michael. On June 21, 1989, Melvin married Carlene Andrews in Clarkdale, Arizona.

He was a member of The Church of Jesus Christ of Latter-day Saints.

Melvin worked for many years in logistics at Hill Air Force Base. He retired at age 55 and enjoyed his life and family.

He loved traveling. He and Carlene were great snowbirds and saw it all. He was a quiet, gentle man with a well-developed sense of humor. His greatest love was his sweetheart, Carlene. Mel and Carlene enjoyed traveling in their RV across the West from Mexico to Canada and lived in Arizona for a number of years. He enjoyed camping and family reunions with his brothers and sisters. He loved sitting around the campfire in Montana with his step-family, Jerry, Chris, Roger, Sherry, Peggy, Blair, Wayne, and grandchildren. We loved and enjoyed him so.