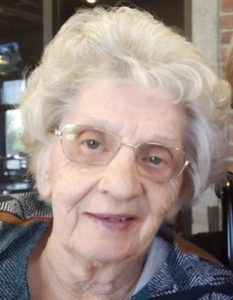 Marianne Miller Jensen, our mother and friend, passed away Tuesday, August 18, 2020 at home in North Logan, Utah with her loving husband, Byron by her side. In the days prior to her passing, her children were able to gather and care for her.

Marianne was born March 17, 1933 to Joseph and Marilla Miller in St. Anthony, Idaho. She was raised in Pocatello, Idaho and led an adventurous childhood with her brothers and sister.

After graduating high school she became a nurse. She owned her own nursing home for a short time where she cared for the elderly and those who were ill. Later she rode ambulance for the hospital.

One evening she attended a bowling match and met a young man who won her heart. Marianne married J. Byron Jensen September 1, 1961 in the Idaho Falls Temple of the Church of Jesus Christ of Latter Day Saints.

Marianne’s greatest joy was being a mother. She taught her children by example and love. She adored and spoiled her 10 grandchildren and 7 great-grandchildren who affectionately all called her ‘Babe’.

Marianne was dedicated to the gospel of Jesus Christ and was an active member of the Church of Jesus Christ of Latter Day Saints. She held many callings and was always in the service of others. One of her favorite opportunities to serve came after Byron’s retirement when together they served a mission to the Polynesian Cultural Center on the BYU campus in Hawaii.

Mom always had a book she was reading. She enjoyed creating and solving math problems, there were always papers with equations scattered about the end tables. Her grandkids loved her cooking, especially her homemade, hot from the oven rolls. Mom loved to sew and she was especially fond of making baby quilts. She donated many hours making quilts for humanitarian efforts.

Marianne is preceded in death by her parents, sister Gwen, and brother Marvin. Surviving are her husband J. Byron Jensen, and brothers James of Chubbuck, Idaho; Donald of Weiser, Idaho and Merlin Miller of Boise, Idaho.

Funeral services will be held Saturday August 29, 2020 at Manning-Wheatley Funeral Home at 510 North 12th Avenue, Pocatello, Idaho. Viewing will be at 9:00am with a brief life celebration at 10:00am. Interment will follow at Restlawn Memorial Gardens.

The family would like to acknowledge Intermountain Health Care and Hospice for the exceptional care, respect, and dignity given to our mother. In lieu of flowers the family suggests donations to the American Alzheimer’s Association or the American Stroke Foundation.

Condolences and memories may be shared with the family at Manning Wheatley Funeral Home.