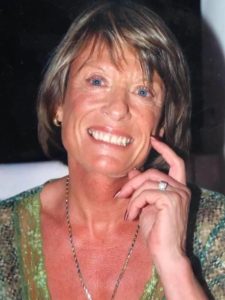 Majorie Oberheim Degnan, of Montpelier, Idaho, passed away in the early morning of Sunday, September 6, 2020 at age 79.

Midge was a wife, a mother, a grandmother, a gardener, a chef, and much more. She could often be found sipping on white wine and Melba snacks or searching for yet another pair of misplaced sunglasses. She remained glamorous well into her 70’s, spending each morning strapping on her sky-high heels and mini skirts and making sure her children and grandchildren knew of the subtle art of moisturizing against gravity to prevent wrinkles.

Born to Adam Henry Oberheim and Hildegarde Augusta Oberheim (nee Friedrich) on May 31, 1941 in New York, Midge was raised in New Canaan, Connecticut. She attended New Canaan High School, where she was both a cheerleader and an exceptional student. From an early age, her smile could light up a room.

After graduating high school, Midge went on to attend the prestigious Bates College in Lewiston, Maine. Midge finished her education in 1961 at the Katharine Gibbs School, a career-training institution for young women in Boston, Massachusetts.

In 1962, Midge fell ill and was taken by her parents to New York Hospital, where she met Dr. Robert Degnan, a medical resident. On August 23, 1962, the pair were married, only six weeks after their first meeting. Shortly after their marriage, Midge and Bob started a family and moved to Hacienda Heights, California. From an early age, Midge wanted a large family. Across California, Wyoming, Montana, Missouri, and Idaho, she raised eight children.

Midge was an avid and skilled gardener and plant lover. Her home was always teeming with life from the plants that sat in nearly every corner. Every summer, an enormous fruit and vegetable garden thrived under her care. Midge cooked, canned, and pickled everything she grew, crafting beautiful meals from the freshest ingredients to feed her growing family. Though she loved fresh, healthy ingredients, she was struck on occasion by a sweet tooth, which she would satisfy by breaking open her secret, bedside drawer filled with Tootsie Rolls and sour Altoids.

After her children were raised, Midge began to travel frequently with Bob. She fell in love with the Caribbean Island of St. Martin, where she spent several weeks each year taking in the sun and the sand. Much to Bob’s chagrin, Midge was also deeply enamored with the local Caribbean street cats, whom she adopted and showered with love.

Until the very end, Midge’s truest love was Bob, to whom she was forever devoted.

It is impossible to describe the grief the family feels at this time. Their comfort comes in knowing Midge is free from suffering. Her legacy shines on through her husband, Dr. Robert Degnan; her eight children, Deena Lorraine, Shane Degnan, Tara Albertson, Colleen Perkins, Shannon Allen, Devin Degnan, Klancie Degnan, and Riley Degnan; her sister, Audrey Swift; her grandchildren and great grandchildren; and all the people who knew her during her lifetime. Midge, Mom, and Nana will be deeply missed.

The family will be holding a small, private, celebration of Midge’s life at a later date.

Flowers and condolences or memories can be sent to 2861 Margo Lane, Pocatello, Idaho 83201 or at Matthews Mortuary.