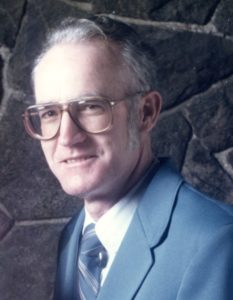 Lyman Sparks Thompson passed away at age 87 on March 14, 2020 at his home in Garland, Utah surrounded by his loving family.

He was born in Newton, Utah to Don Owen Thompson and Leora Myrle Sparks on March 3, 1933.

He married Dorothy Hill on July 29, 1955 in the Logan Temple of the Church of Jesus Christ of Latter-Day Saints, after which they had a family luncheon in Logan, Utah. They then headed on their honeymoon through Island Park and West Yellowstone into Canada.

They started their life-long journey in Tremonton, Utah; then later moved to Logan, Utah; next to Idaho Falls, Idaho; then settled in Garland, Utah. He had worked at Baugh Motors in Logan; for the Railroad; Intermountain Indian School in Brigham City; and 34 years at Thiokol in Promontory where he retired in 1990 (but really never retired). Because his passion was electrical work, he worked for Golden Spike Electric until his health no longer allowed.

In his free time, Lyman enjoyed fishing, hunting, and camping, spending time with grandchildren and family. He also enjoyed the cabin in Island Park with the love of his life (Dorothy).

He was a member of the Church of Jesus Christ of Latter-Day Saints where he served in many callings including Ward Clerk, Elder’s Quorum Presidency, Missionary in the Bishop’s Storehouse, and a Stake Missionary.

Graveside services will be at 11:00am at the Garland, Utah Cemetery. All family are welcome.

The family offers a special thank you to IHC Homecare and Hospice and his personal physician, Dr. Crossland at the Bear River Clinic.