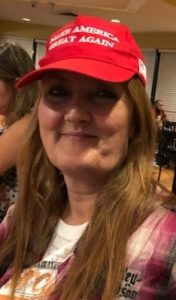 Our loving wife, mother, grandma, sister, aunt and friend, Lorie Ann Bennett, 51, passed away on Friday, February 21, 2020 at McKay Dee Medical Center from an injury to her head.

She was born on April 25, 1968 in Ogden, Utah, a daughter of Tony and Laura Lee Everts Olsen. She graduated from Box Elder High School in 1986.

Lorie married the love of her life, Scott Edward Bennett on December 29, 1992 in Harrisville, Utah.

She worked at the KoKoMo Club in Ogden as a bar tender, until she became a homemaker to take care of her family.

Lorie loved being a grandma and spending time with her grandchildren. She also enjoyed going for bike rides, camping and summer vacations at the beach.

Celebration of Life will be held on Saturday, February 29, 2020 at 2:00pm. We encourage all to bring pictures, memories or anything to celebrate Lorie’s life at Gillies Funeral Chapel, 634 East 200 South, Brigham City, Utah. Interment will be in the Deweyville Cemetery.