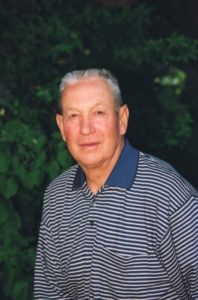 Our miracle man, Lee Clark Ream, a lifelong resident of Dingle, Idaho, or as Lee would say “the capital of the world,” passed away August 26, 2020, in Montpelier, Idaho, at the age of 87.

He was born October 30, 1932, in Dingle, Idaho, to Mitchel Ream and Mabel Clark. He was the youngest of 4 children, being the only boy. Lee attended school in Dingle and Montpelier, where he received many certificates for never being absent or tardy. In high school, the girls nicknamed him “doll face.”

He graduated from Montpelier High School in 1951 then continued his education in Logan at Utah State Agricultural College, now known as Utah State University. While at college, he was a member of the Intercollegiate Knights, a service organization whose motto was Service, Sacrifice, and Loyalty, and in 1953 was named Knight of Knights by the Utah State Chapter of Spurs. He also was affiliated with the Kappa Sigma Fraternity and was part of the ROTC program. In 1955, Lee graduated with a Bachelor of Science Degree in Animal Husbandry with a minor in General Agriculture.

He then returned home to Dingle and purchased the cattle ranch he grew up on from his mother (having lost his father when he was 16). Lee raised Black Angus/Black Angus cross cattle, built his own machinery, and farmed the land with skill. He also worked as an insurance agent for Farm Bureau and as a mechanic for Jenkinson’s before becoming a full-time rancher. He was nicknamed “O-Lee” by other ranchers in Dingle for his skills in mechanics as they would say, “Oh Lee, can you fix this?”

On June 12, 1960, he married Joyce “Jo” Nate at Mount Hood in Cherryville, Oregon. They were blessed with 5 children and were later sealed as a family in the Logan Utah Temple on July 12, 1973. Lee was baptized a member of the Church of Jesus Christ of Latter-day Saints in 1956 and was an active member, holding both ward and stake callings throughout his life. He served as a tour guide prior to the re-dedication of the Logan Temple in 1979 and later he and Joyce served as ordinance workers in the Logan Temple, which Lee said was one of the best times of their lives.

Lee liked to hike the mountains hunting wildlife with his good friends. He won many trophies in archery and made his own arrows and also bullets. He was the very first person to kill an elk with a bow in Bear Lake County.

Being a rancher, Lee was passionate about water conservation and resources and was involved with the Agricultural Stabilization & Conservation Service (ASCS), Bear Lake Regional Commission, Dingle Irrigation, and served as president and water master of Ream-Crockett Irrigation, an office he still held at the time of his passing. Lee received the Silver Clover Award for his years of services as a leader in the 4-H program and was involved in various organizations over the years including Jaycees and Bear Lake County Hospital Board. He was also a volunteer firefighter and at one time the fire chief in Dingle.

Lee was our miracle man as he suffered many serious accidents and health conditions over the years, but he overcame these challenges because he believed “Anything can be done with patience, perseverance, and sweet oil,” a saying he will always be remembered by.

His favorite pie was “round” and he loved green Mountain Dew because one can drink it warm or cold. He will be remembered for his famous granola, fun personality and sayings, his chuckle, quick wit, and ability to easily socialize with others. He was a strong man in stature and spirit exemplifying strength, integrity, wisdom, knowledge, generosity, and a good work ethic. Lee believed God helps those who help themselves. Lee cherished his “Jo” as evidenced by his deep love and devotion to her over the past 4.5 years, being by her side every day in the skilled nursing facility. Many have referred to their love story as being like the movie “The Notebook.”

Lee was preceded in death by his parents and 3 sisters, Lois, Norma Jean, and Ramona; son Danny, and grandsons, Joshua Thornock and Corey Weston. He is survived by his beloved wife “Jo,” children Jolaine (Evan) Skinner, Lori (Brent) Stephenson, Scott (Mara) Ream, and Audra (J.D.) Robertson, and many grandchildren and great-grandchildren who all love him very much.

Funeral services will be held Monday, August 31, 2020, at the Ream Mansion in Dingle, Idaho, beginning at 11:00am with a private family viewing before at 10:00am. Interment will be at the Dingle Cemetery.

The family wishes to thank the staff at Bear Lake Skilled Nursing Facility, Portneuf Medical Center, and Bear Lake Memorial Hospital for the compassionate care of our father and grandfather. Also, many thanks to Schwab-Matthews Mortuary and family and friends for their loving kindness and concern during this difficult time.

Dad/Grandpa, we will carry on with “patience, perseverance, and sweet oil” as we anticipate a blessed reunion with you again one day.