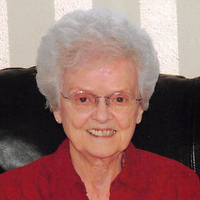 Laura was born April 11, 1924 to James J. and Mary Lucetta Shumway Thompson in Garland, Utah. She was the eighth of nine children. She attended school in Garland and graduated from Bear River High School in 1942. Following graduation she moved to Salt Lake City where she worked at Fort Douglas and at Union Pacific in the dispatch office.

In 1945, she met Dean T. Kunz when he returned from serving in Europe in World War II. They were married in the Salt Lake Temple on May 1, 1946. After their marriage they moved to Bern, Idaho to farm and ranch for the next 30 years. There they raised cattle, horses and their four children; Susan, Linda, Mark and Kyle.

In the summer of 1976, Dean and Laura moved to Rexburg where Dean had been asked to develop and teach the Horsemanship Program at Ricks College. After Dean’s retirement from Ricks they moved to Ririe where they lived until Dean’s death in 1997. They continued in their church activity and added to the many friends they had made over the years.

Following Dean’s death in January, Laura remained in her home until August. At that time her sister Melba became ill so she went to Bountiful, Utah to help with Melba’s recovery. Together they decided they had a good thing going so Laura sold her home to a grandson and lived for 15 wonderful years with Melba. There was no more wonderful place to visit than at Melba and Laura’s home.

In 2012 Melba and Laura moved to Idaho to live with their families and in October of 2015 Laura moved to Homestead Assisted Living. She remained there for the last three years in remarkably good physical and mental health until a fall five weeks ago. Laura made good friends everywhere she went. One of her good friends from Homestead said of her “Laura had an impact on everyone she met who took the time to know her”.

A graveside service was held at the Bern Cemetery, Bern, Idaho on Wednesday, September 2 at 12:00 noon.

Condolences and memories may be shared with the family at Baxter Funeral Home.