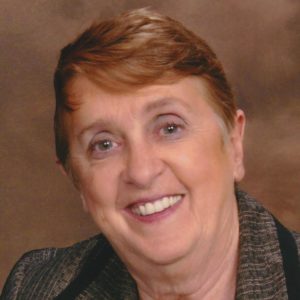 She was born in St. Charles, Idaho, on November 8, 1940, to LeRoy and Naomi (Keetch) Hirschi. As the third of seven children, she learned early from her family how to work, serve, laugh, and love.

After serving as student body president her senior year and graduating as valedictorian of her class at Fielding High School, Paris, Idaho, she attended BYU where she earned her BS degree in business education, followed by an MS degree from UNO. As a talented instructor, she taught business classes at Fielding High School, USU, and BYU-Idaho, where she retired in 2004.

She married her high school sweetheart, Neil William Morgan, on June 8, 1962, and they settled in Logan, Utah, where Neil worked and attended school. Together they raised four children, living and working not only in Logan but also in London, Omaha, Spokane, Rexburg, and Providence, Utah, where they enjoyed their retirement years. They bought a home in San Tan Valley, Arizona, as well, where they spent the winter months.

LaNae was a faithful and devoted member of The Church of Jesus Christ of Latter-Day Saints; she served in many capacities, including leadership positions, in Primary, Young Women, and Relief Society and as an officiator in the Logan Utah temple. In 2006, LaNae and Neil were called to serve an LDS mission at Martin’s Cove.

She deeply loved her family and delighted in attending the significant events in her grandchildren’s lives. She also developed many dear friendships over the years and always remembered them, even after being diagnosed with Alzheimer’s following the death of her husband. Although she possessed a spunky nature and feisty attitude that no one dared mess with, her sweet smile and contagious laugh are among her most memorable and beloved traits.

LaNae and Neil were privileged to visit every continent (including Antarctica) with the exception of Australia, which she desired to see on her next trip. They sponsored several vacations with their children and grandchildren because creating fun family memories and unity within the family were so important to them. She also spent as much time as possible in the Bear Lake Valley making memories with extended family members and friends, visiting North Beach and playing cards, eating good food, and strengthening relationships at the Hirschi Hideout in St. Charles.

Funeral services will be held outdoors with masks required at 11:00am on Monday, August 24, 2020, at the LDS pavilion, 75 North Main Street, St. Charles, Idaho. A public viewing will be held an hour prior to services. Interment will be in the St. Charles Cemetery.