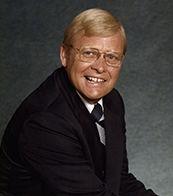 Our beloved husband, father, grandfather, and great- grandfather passed away peacefully at home on June 21, 2020, after a valiant battle with cancer.

Burke was born September 1, 1937, in Hyrum, Utah, to Lloyd Odell Larsen and Arlene Nielsen Larsen. He believed growing up in Cache Valley in the 1950’s was heaven on earth.

He graduated from South Cache High School, where he was active in sports and student government. Burke was in the Army from 1956 to 1958, where his farm discipline served him well. He was called on a church mission to Denmark, which had a profound effect on his life.

He graduated from Utah State University in 1962 and married Roselyn Petersen Larsen in 1963.

His integrity, humility, and work ethic brought him success in his management career with the U.S. Government. He lived and believed in service to his church and community. He served in many capacities, including Bishop of his ward and member of the school board. He led with empathy, always treating others with dignity and respect. He founded a charity golf event that raised thousands of dollars for the Ogden Rescue Mission and spent ten years as a service missionary at the Family History Library in Salt Lake.

His passions included taking good care of his family and friends, golfing, biking, making others laugh, and chocolate cake.

In lieu of flowers, please donate to the Ogden Rescue Mission.