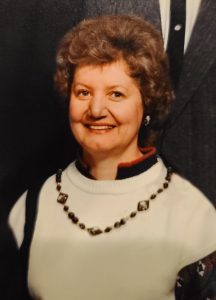 Kayanne Een Rasmussen, of Brigham City, Utah, passed away peacefully in her sleep on September 5, 2020 at McKay Dee Hospital.

She was born on June 10, 1939 in Murray, Utah, into the U.S. Great Depression and oncoming WWII, with rationing and unrest. Kay and her 3 siblings were raised by their hardworking single-parent mother, Lola Redd. Lola along with her 4 children (La Mont, Kay, Trish, and David), moved in with her mother, Myrtle Drucilla (Porter) Redd.

Kay grew up with a love for music, swimming, climbing trees and riding horses.  She spent her 5th-grade year with her beloved Uncle Bill in Scipio, Utah where she could out-ride all the boys her age and many who were 1 or 2 years older. Her favorite childhood memories were living with her angel grandmother and spending many summers with her Uncle Bill.

The family lived in a home at 24 West North Temple in Salt Lake City, Utah where the Conference Center stands today. When Kay was 13, Lola married Perry Lester Een.  Perry adopted the 4 children, and later 3 siblings—Susan, Kim, and Kristie—were born to this union.

Kay’s vibrant personality, genuine compassion, and innate enthusiasm brought both lifelong friends and popularity, and she served in a Student Body Office at Bountiful High School.  She attended college at BYU, U of  U, and graduated from Utah State University with her teaching certificate for Elementary Education.

In the middle of her college years, Kay served in the Denmark Copenhagen Mission for 2 years. Upon returning home, she met Donald Robison Rasmussen at an Institute dance.  He had previously served in the same mission.  They courted and later married on June 19, 1964 in the Manti Temple.

Kay taught Elementary School at different times of her life, totaling 6 years.  She and Don later returned to serve an 18-month CES Couple’s Mission in Denmark from July 1998 to December of 1999.  She enjoyed instant confidentiality with her companion through the Danish language for over 56 years.  Both before and after marriage, she was extremely effective in various church callings and created quite the “dynamic-duo” as a returned missionary with her Seminary-Teacher husband.

Kay’s photographic memory, eminent charisma, genuine love, and fervor for the gospel made an incredible impact to those whose lives she touched, especially her children and family.  Each of her sons recall comments from their peers on a number of occasions through adolescence saying, “I’d give anything to have your parents; you have no idea how blessed you are to have such amazing parents!”

Kay was a prolific teacher, who, though touching countless lives, impacted her children and grandchildren the most.  She is remembered for “her playful, spunky spirit” and always being a “delightful and devoted grandmother.”

Interment in the Fillmore City Cemetery.

Condolences and memories may be shared with the family at Rasmussen Mortuary.