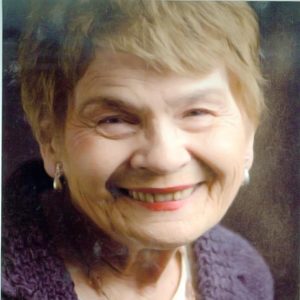 Jennie Mae Jensen Christensen, 90, died peacefully at home on February 23, 2020, in the presence of her family.

Jennie was born on January 1, 1930, to Gladys Matkin Jensen and Walter Dale Jensen. She was the first baby born in Cache County that year, the first year a New Year’s baby was recognized by the county.

Jennie was a native of Cache Valley, and attended Logan City schools through Logan High School and Utah State University, working for the school newspaper at both of those schools. Jennie worked for a number of years for the Herald Journal as a news and features reporter.

In 1972 Jennie joined the Cache Valley Media Group as news director and host of several radio programs on station KVNU. It afforded her great opportunities as a broadcaster, from interviewing President Harry Truman to covering First Lady Betty Ford. In 2017 Jennie was inducted into the Utah Broadcasters Hall of Fame, commemorating her 45th year on KVNU. She has been recognized as a Citizen of the Year by Logan City, as a Homecoming Grand Marshall by Utah State University, and received awards from civic and other organizations.

Jennie always had a love for sports, participating when young, and was a devoted Aggie and Jazz fan. She especially enjoyed watching her husband and family participate in sports and activities such as tennis, baseball, football, music and dance. In her earlier years, Jennie was an exquisite knitter and was encouraged by her daughter-in-law to continue on with the craft. She enjoyed outings and get-togethers with family and friends and always made time for grandchildren and great-grandchildren. She was enthusiastic about entering contests, and winner of many prizes including appliances, stereos, trips, and even a thoroughbred horse and trip to the Kentucky Derby.

Jennie was a member of the LDS church and married Ross Fredrickson Christensen on May 5, 1949, in the Logan LDS Temple. They were the parents of three sons. Jennie is survived by her brother Rodney Jensen, three sons, Randy (Rhonda) Logan; Kent, Logan; and Scott, Santa Barbara; three grandsons, Dylan (Lisa) Atlanta; Cole (Tammy) Nibley; and Benjamin (Courtney) Salt Lake City, and seven great-grandchildren, Braden, Brooklyn, Carson, Jackson, Easton, Zachary, Lily and several nieces and nephews. She was preceded in death by her parents, her husband Ross, and a baby sister, Sharon.

The family wishes to express their appreciation to the wonderful caregivers from Sunshine Terrace Home Health Care and Hospice. And a special thanks to Doctors Michael Stones and Douglas Smith for their exceptional care for the family through many years.

Condolences and thoughts may be expressed online at www.allenmortuaries.net.