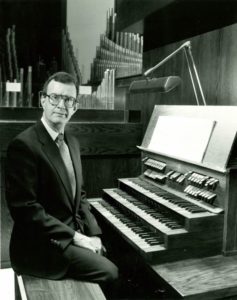 Dr. James Drake was best known as a world-class organist, concertizing in numerous countries around the world.  He was an outstanding teacher and professor of organ.  He loved people, scriptures, the gospel of Jesus Christ, playing practical jokes and making spoonerisms.

Jim, as he was often called, was born October 24, 1938, in Logan, Utah to Reuben Merritt Drake and Edna Johnson Drake.  He lived his early years in Utah, Louisiana, and Idaho, moving with his family to Pocatello in June 1947.

At age five, he took a distinct interest in the organ and began piano lessons at age six with his mother.  At age 12, he became the organist for his ward in The Church of Jesus Christ of Latter-day Saints.  He studied organ with Keith Kendall in Pocatello and Ruth Barrus in Rexburg during his high school years.  He also served as organist for the Presbyterian Church in his junior and senior years.

After attending Ricks College, he was called as a missionary to the Swiss-Austrian Mission for 2 ½ years.  Not only did he become fluent in German, he had the opportunity to play many organs in Switzerland, Austria, and Germany.

Following his mission, he went to London, England, where he studied organ with Guy Wietz, a great French organist.  There he earned a degree at the Royal College of Music.  He returned to London a few years later to study the Alexander Technique of body alignment and relaxation, which he taught and used throughout his life to help himself, other musicians, and many others.

While in England, he made the acquaintance of many of our Welsh relatives, found through genealogy pursuits.  This opened up the way for other family members to visit in succeeding years.

Following some studies at the University of Utah, he received his Master’s Degree from Indiana University, studying organ with Robert Rayfield.  Then he earned his Doctorate Degree in Organ Performance at the University of Southern California, where he studied with Irene Robertson, while also teaching organ at Claremont College.

Jim taught organ at Ricks College and the University of Utah.  He taught at Adams State College in Alamosa, Colorado for three years, where he started the organ program.  His longest academic career appointment was as head of the Organ Department at Utah State University.  For thirty-one years, he taught many students who became prominent organists.  He retired in 2006, and moved back to Pocatello.

Jim concertized and held workshops throughout the world—in both west and east Europe, Great Britain, South Korea, Canada, and the United States.  He played at many notable cathedrals, some of them several times.  To name a few:

Notre Dame in Paris, where he received a standing ovation by 9,000 people.

St. Peter’s Basilica at the Vatican in Rome, where 10,000 people gave him a standing ovation.

The restored Frauen Kirche (Church of Our Lady) in Dresden, Germany.

The National Cathedral in Washington, D.C.

The Cathedral of St. Mary in Erfurt, East Germany.  Dr. James Drake was selected by the U.S. State Department in 1973, to become the first American organist to go behind the Iron Curtain on a cultural exchange.  When he first arrived in East Germany, he was subjected to ten hours of Communist Party/KGB interrogation, wondering whether he would ever be released to return home.  Moreover, he was escorted by armed KGB agents to the cathedral.  While playing his concert, the KGB encircled the cathedral with weapons very visible.  He played a wonderful concert at St. Mary Cathedral to a capacity crowd, and received a large and prolonged standing ovation.  Several members from a small Branch of The Church of Jesus Christ of Latter-Day Saints were in attendance.

Hyde Park Chapel of the LDS Church in London, where he played numerous missionary recitals for tourists.

Tabernacle organ in Salt Lake City, Utah, where he played recitals and demonstrated the acoustics of the Tabernacle for over forty years.  Jim was known for going down from the organ loft to greet attendees, and inviting those who desired to come see, and even play, the organ.  Many family members, students, and friends have had that memorable opportunity to play the Tabernacle organ.

Jim has traveled in 31 foreign countries, 42 states, and 6 Canadian provinces.

Jim was a “people person.”  He had a rare gift of drawing people to him and influencing them for good.  He would listen attentively and respond.  He was generous to a fault with his time, finances, organ and Alexander Technique instruction.  He helped missionaries, students, and many others financially—the epitome of charity, a truly good soul.  He had a soft heart, and was always looking out for the needs of others.  He loved little children, and they loved him.  He simply loved people.

He also had a great sense of humor, which many people are remembering.  In particular, he loved spoonerisms (exchanging first letters of words), and limericks.  He was always so much fun!!

He is preceded in death by his parents, R. Merritt and Edna Johnson Drake; brother, Richard (Bonnie) Drake; and brother-in-law, John (Sherrill) Redd.

Jim’s family would like to give special thanks to Home Helpers, Encompass Health Care and Hospice, Quail Ridge Assisted Living, and his doctors and nurses for all their loving care.  Particular appreciation is given to neighbors, friends, and family who have attended to Jim’s needs, and given devoted service to him over the past many months.

Due to the Coronavirus pandemic, there will be a private graveside service with a memorial service to be announced at a later date.

Condolences and memories may be shared with the family at colonial-funeralhome.com