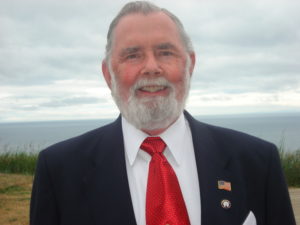 James Rush, Jr., 82, of Brigham City, Utah, passed away on Wednesday, September 30, 2020 at his home with his loving wife Vicki by his side.

Jim possessed a wanderlust his entire life, which would take him around the world as a young man and lead him to live in many areas across the United States later in life. As a teenager, he spent some time traveling with a carnival. He then joined the military, where he served for 20 years. He was a U.S. Navy staff sergeant during the Vietnam Era, served during the time of the Cuban Missile Crisis, was part of the United States Naval Construction Battalions (the Seabees) in Japan and the Mediterranean, and was a staff sergeant in the U.S. Army National Guard. After his military service, Jim became a member of the Veterans of Foreign Wars (VFW) Combined Veterans of Box Elder County Post 1695.

Jim lived in many parts of the United States, including New Jersey, Florida, Virginia, Pennsylvania and Washington, making his final home in Brigham City, Utah with his wife Vicki, their family and many friends.

An industrial electrician by trade, Jim was a member of International Brotherhood of Electrical Workers Local 46 in Seattle, Washington and spent a lot of his earlier days on the road, traveling for work to support his family, which led him to jobs in nuclear facilities in New York, Pennsylvania and New Jersey. He has five children from a previous marriage with Gloria Pastula (née Zarski).

He loved the outdoors and the activities that kept him active and in nature, including hunting, riding horses and keeping up his marksmanship at the shooting ranges. He also enjoyed hobbies such as being a ham radio operator, leather and bead work and reloading bullets for reuse; at one time he was a member of Toastmasters, doing what he loved – telling stories.

Jim met and married his wife Vicki Lynn Gailey, whom he lovingly always called, “Sweetheart,” on November 14, 1998. Their union was later sealed in the Seattle Washington Temple of The Church of Jesus Christ of Latter-day Saints.

He was a devoted member of the Church of Jesus Christ of Latter-day Saints. He served a Military Relations Mission with Vicki at Whidbey Naval Air Station. He was a temple worker in the Brigham City Utah Temple. He served in the Maple Springs Branch, and as counselor in the Bishopric in the Oak Harbor 2nd Ward, Whidbey Island, Washington.

Jim was deeply loved and will be greatly missed and remembered by his expanded family and many friends. He was preceded in death by his parents, his son John Rush and his sister Audrey Lafrosia.

Special thank you to Integrity Hospice, nurses and staff for all their love and caring service.

The family requests that attendees follow social distancing guidelines and wear masks as recommended by the CDC.

A live stream of the services can be viewed by clicking here.

In lieu of flowers, the family requests that donations be made to the Wounded Warriors Project.