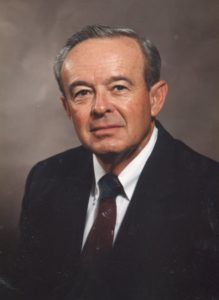 Our beloved husband, father, grandfather, and great-grandfather, Jack B. Parson, Jr., passed away peacefully in Brigham City, Utah, on March 21, 2020, at the age of 85. In his final hours, he was surrounded by his loving wife and each of his children, their spouses, and many of his grandchildren.

Jack was born on October 15, 1934, in Logan, Utah, to Jack B. Parson and Bonnie Fulkerson Parson. Jack was the eldest of four children and grew up in Logan, Utah, where he played football and learned to fish, hunt, and golf – passions he pursued throughout his life. At the ripe old age of fourteen, Jack began working with his father building roads in Utah and Idaho; his love of Island Park, Idaho, began on his first road job. Jack is a graduate of Logan High School and Utah State University where he was affiliated with the Sigma Chi Fraternity; he was always proud to be an Aggie.

In high school, Jack met the love of his life, DeAnne Wilson, though he had caught her eye years earlier as he rode his bike past her childhood home with his bamboo fishing rod strung over his shoulders. Jack and DeAnne were married and sealed in the Logan Temple on June 2, 1954. They were blessed with a large posterity who treasure memories of fishing, hunting, golfing, Jack’s peaches and tomatoes, Sun Valley reunions, Henry’s Lake cabin trips, and Grandpa’s cheering at games, plays, and concerts.

Jack had a magnetic personality that quickly led to genuine connections and friendships. He was kind, considerate, and grateful right to the end. His infectious smile and twinkle in his eyes would brighten the room when sharing stories about his life, hobbies, and loved ones. Throughout their lives, Jack and DeAnne have been blessed with cherished friendships in each place they called home: Logan, Brigham City, and Pleasant View.

Jack spent his career working with his father, brothers, sons, and trusted colleagues building Jack B. Parson Companies. From roots in Cache Valley, the business grew to become a leading contractor and materials supplier in the Intermountain West. Jack surrounded himself with a strong team and empowered and supported them to grow the business. He lived his belief that a strong construction industry benefited all and gave freely of his leadership and time to the Associated General Contractors of America, serving as a director and national executive committee member. He also served as director and chairman of the Utah chapter and received its highest honor, the Eric W. Ryberg award. Jack was a founder of the Parson Construction Management program at Weber State University, from which he also received an honorary doctorate degree.

Jack was a member of the Church of Jesus Christ of Latter-day Saints and served faithfully in callings that blessed the lives of many including: Home Teacher, Instructor, Young Men’s President, and Bishop. He and DeAnne served as missionaries at the Salt Lake Conference Center where they loved meeting visitors from around the world.

Jack’s family brought him his greatest happiness. He is survived by his wife of nearly 66 years, DeAnne Wilson; his four children and their spouses: Becky and Ryan Trimble, John and Dottie Parson, Susan and Gary Allen, and Scott and Allison Parson; 16 grandchildren; and 28 great-grandchildren with the excitement of more to come. Also survived by his sister Kathryn Rubin, brother Michael Parson, and cousin and lifelong best-friend, Bill Smith.

He is preceded in death by his parents, brother Ned, grandson Michael Kropf, and great-grandsons Hayden Hadley and Cohen Christoffersen.

The family appreciates the loving care provided by the employees of The Gables Assisted Living of Brigham City and Signature Healthcare at Home and Hospice (special thanks to Sue, Erin, Kortney, and Elaine).

We are grateful for our hope and faith that Jesus Christ makes it possible for families to be eternally reunited through our Heavenly Father’s plan of happiness.

Jack will be laid to rest in the Brigham City Cemetery in private family services. A celebration of Jack’s life will be held at a later date.

In lieu of flowers, please consider sharing a message, tribute, or contribution to a cause Jack supported at myers-mortuary.com