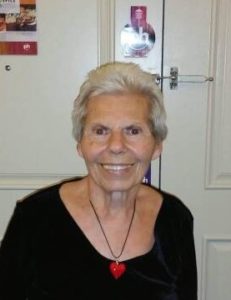 Ingrid Anna Ricks (Burkhardt) departed this life on August 28, 2020, at the age of 85 years old. She passed away peacefully in her home surrounded by her loving children.

She eventually relocated to Logan, Utah. Shortly thereafter, she met her eternal Sweetheart, George Ronald Ricks. They were married on March 8, 1958.

They both had a great love for music and performed at many venues across the states of Utah and Wyoming. This love for music was instilled in their children at an early age and they formed a family country western band.

They had eight loving children together. Ingrid was a loving mother, wife, sister, and daughter. She was adored by her many grandchildren and great-grandchildren. She loved animals and rescued countless pets throughout her life.

She received many ribbons and awards for her unique style of knitting. Her love for children led to her working in the Saint Paul Lutheran Daycare.

She made a difference in so many peoples’ lives. Her compassion, love, and kindness will never be forgotten, and she will always live in our hearts. Although she had a lengthy battle with Alzheimer’s Disease, her strength, courage, and zest for life helped her through the challenges.

She was preceded in death by her husband, George Ronald Ricks; son, Sonny Allen; and daughters, Marianne and Angela. She is survived by her children, Ronald Hank; Ingrid Clara; Nancy Ann; Randy Lynn; and Scotty Dale.

A private family viewing followed by a graveside service was held on Thursday, September 3, 2020, at the Plain City Cemetery in Plain City, Utah.