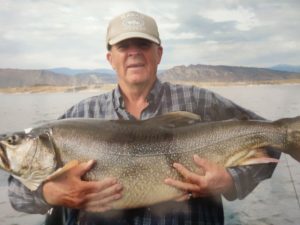 He married Kay Czarnik and together they had two sons, Wade and Cori. They later divorced. Chad married Nancy Collard December 1982. She had two children Marty and Jackie. Nancy died January 2007. Chad then married Karen Hess on June 22, 2008. Karen has three children: Stacey, Janet and Mary.

He graduated from High School in Salt Lake City.

Chad worked for General Electric as a motor winder for 25 + years.

He loved hunting, fishing and golfing from an early age. He had a great love for the outdoors and enjoyed teaching others how to fish and hunt.

He is preceded in death by his parents, wife Nancy, sisters: Beth and Diane.

The family wishes to thank the Barrington Place and Brio Hospice for their loving care of Chad, especially Nicole, Julie and Amy.

A Private graveside services will be held Monday, March 23, 2020 at Redwood Memorial.

In lieu of flowers, Please be kind to your friends and neighbors.