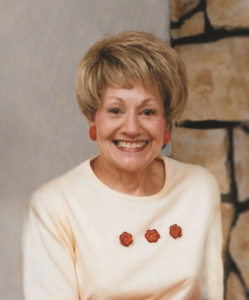 In 1987, a first grader walked a mile through a Wyoming blizzard on a day when school was cancelled to spend time with his teacher. He said his life in Mrs. Johnson’s class was preferable to his life at home.

Such was the care and attention that Harriet Johnson showed everyone in her life.

Harriet Westenskow Johnson passed away on February 24, 2020 in Brigham City, Utah from the effects of Alzheimer’s disease at the age of 78. She was born in Delta, Utah on March 7, 1941 to parents who were teachers. Teaching became her own vocation after her graduation from Utah State University in 1971, where she was a prominent student leader and beauty queen.

As a child in Brigham City, Harriet could be found helping with the family chickens, packing fruit, or enjoying time with her four sisters, Ann, Carol, Janet and Jean. The friendliness of Brigham was reflected in Harriet’s nature. Everyone, from a lonely school janitor to the nearly 1,000 grade school students she nurtured over 33 years – including in Peru, to the caring staff at the Gables memory care facility where she spent her final months were buoyed by Harriet’s pleasant smile and personal interest.

Harriet married Wally Johnson in 1962 and spent the next 57 years taming, training and refining the Rock Springs native. They shared a wealth of experiences together.

Life took Harriet to many parts of the world, including Peru, Texas and Wyoming. But regardless of where she lived, what mattered was how she lived. She dedicated her life to others, especially her children, Penny and Craig. A fun and loving mother, she kept them both entertained and spiritually grounded. As a productive member of The Church of Jesus Christ of Latter-day Saints, she showed a life-long commitment to her Savior and his gospel.

A talented woman, Harriet zealously pursued several hobbies. She produced beautiful ceramics, intricate needlepoint, beaded jewelry and decorative sweatshirts. She also sang in several performing choirs. Her crowning project was a multi-volume set of family scrapbooks. “By seeing the old photos,” she explained, “they’ll know how important they were to me.” In short, Harriet was not only an example of how to live, but her courage and warmth after her diagnosis taught us how to be gracious at the end.

With her passing, her influence on her family will not be diminished. It will only increase.

The family suggests making a donation to the Cystic Fibrosis Foundation (https://www.cff.org/) in lieu of flowers.