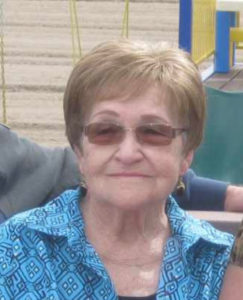 Evelyn Rainey 87, of Corinne, Utah, formerly of Newdale, Idaho, passed away peacefully on September 12, 2020 at the home of her son, Denton Allen.

Evelyn was born on May 25, 1933, the second of four daughters, to Alfred and Lillian Jorgensen Tschikof in Kimball, Idaho. She attended elementary school in Kimball and Firth and graduated from Firth High School in 1951.

She worked hard all her life as a secretary to three doctors, secretary for General Electric Company, legal secretary, Trust Officer for Valley Bank, field secretary for Bannock Paving, and Civil Deputy for Fremont County Sheriff. She retired in September of 1996.

She lived and worked in eastern Idaho all her life, but her favorite place was Island Park where she and Vaughn lived for several years.

She is survived by a daughter, Rosemary (Kelly) Goodman of Gooding, Idaho; sons, Steven (Debbie) Allen of Lake Havasu, Arizona; and Denton (Susan) Allen of Corinne, Utah; and a sister, Cindy (Richard) Baker, of Liberty, Utah.

She is preceded in death by her husband, Vaughn, two sisters, Marlene and Margo, and her parents. She was blessed with 11 grandchildren and 34 great- grandchildren.

Her favorite charity was the Primary Children’s Hospital in Salt Lake where she spent over a year as a very young child. Donations in her name would be appreciated.

According to her wishes, cremation was arranged, and no services are planned.