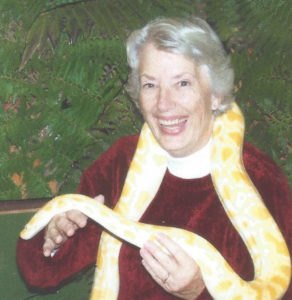 While married to her first husband Clarence Custer, she lived on the Island of Eleuthera, in the Bahama Islands. That stay made a big impact on her, and changed the course of her life.

After divorcing Clarence a few years into the marriage, she met my father, James Emory Thompson. They were married in the little red chapel, in Yosemite Valley, California on August 25, 1962. I Heather LaRue Thompson, was born 3 years later. I am her only child.

We moved on the boat when all it had was the sole (floor), bulkheads (walls between cabins), and the overhead/cabin enclosed with port holes. ***(I first really knew my mom was extra smart when I was 12. She purchased a small, fire proof safe, but didn’t want to memorize a combination she could forget with time. So she took the safe apart and re-set the combination to my birthdate. I remember all the little pieces on the kitchen table and my dad’s look of wonder.)***

Mom designed the interior layout of the boat, mom did all interior painting/varnishing, mom installed the engine room noise dampers and designed /installed the electrical system. Mom designed and installed the plumbing. My dad had the dream, but mom made it happen, even though she could barely swim, and got really sea sick. Dad was the hippie; mom was president of the Straight-laced club.

Mom played the piano, and had a passion for classical music. When she wasn’t listening to operas. But her absolute FAVORITE group/type of music was anything the Soviet Army Choir preformed. She would blast them over the old turn table, sing along and bawling at how beautiful the music was. And while she listened to that loud classical music, she created, and built, and imagined, and built some more.

She started her own secretarial service called Thompson Office Services, it was very successful, but the boat came first. Then Calico Cottages, a DIY collapsible dollhouse, you built yourself from a kit. She actually had Goodwill Industries put together over a hundred of them and advertised them in Sunset magazine. But at the same time, she was talking with David Packard (The Packard of Hewlett-Packard Computers) about refining the alphabet and going to a phonetic system of spelling, 40 years before texting made her idea a reality.

She decided that a national synagogue should be built outside Washington D.C. on a hill, the building would be shaped like the star of David, rising to the heavens to a point, made of different shades of glass, illuminated from inside. And then she wrote an opera. It took place in a park, on the fourth of July 1976. A tragic love story of a white girl and black boy who fall in love, marry, have a child, and then are ripped apart by his incarceration for heroin use. She scored it to both contemporary and classical music.

Multiple jobs as an editor, inspired her to re-edit My Bondage My Freedom, by Fredrick Douglass, so that, as she put it “People would read it”. She thought every sixth grader in America should read it, and thought Douglas’ flowery oratory would bore kids today. She did the edit, self- published it, and gave more copies away, than were ever sold. But she did it. She had dreams, that she spent the time life gave her, trying to fulfill. By the time she was working on the opera, synagogue and book, my father had passed, and mom had remarried for the third and last time.

Alan F. Anderson was the step-father everyone hopes for. He treated mom like a queen. She wanted for nothing, and knew she was as loved, as she loved him. When he retired from sheet metal work, he and mom went long haul truck driving. Yes, mom drove a big rig! They traveled all over the world, including a river trip thru Russia that fulfilled a lifelong dream. She loved Alan deeply, and had a wonderful 25 years with him. When Alan died in 2015, mom moved to Weston, Idaho to live with me. Doing word searches, she wanted to use her brain to the end. She has inspired so many. She has inspired ME, to follow my dreams. That makes her the best mom, that ever was.