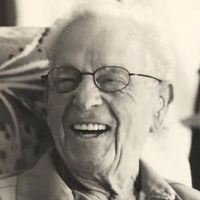 Verl was born March 14, 1915 in Mapleton, Idaho, the third of 9 children born to Rufus and Lettie Long and was raised up Cub River Canyon where the family farmed for a living. After graduating he served a mission for the Church of Jesus Christ of Latter-day Saints in Houston, Texas. Following his mission he attended Utah State University where he completed his civilian pilot training.

When America entered World War II in 1943 he joined the Army Air Force and was stationed near London England. While there he went to a music shop to buy records and met his future wife Audrey Thurman. They were married April 12, 1945. While in England he met Dr. Barnard, a Chiropractor, and spent many weekends at his home. This relationship sparked his interest in Chiropractics.

After the war he attended Western States Chiropractic College in Portland Oregon. He opened his first practice in Tremonton, Utah. In 1957 he bought a chiropractic practice in St. Anthony, Idaho. He had the gift of healing and was never happier than when someone was free from pain. He was blessed to continue healing people until he retired at age 85.

He was a faithful member of the Church of Jesus Christ of Latter-Day Saints throughout his life serving in many church callings. He especially enjoyed his time in the Bishopric with Vincent Birch and Keith Greenhouse and working with the Priest age boys.

He is preceded in death by his wife Audrey, his daughter Suzanne Saling (Wesley) and son Mark Long of St. Anthony, his parents and siblings, Wendell, Thora, Myrle, Leola, Bryce, Reed and Vonda.

The family would like to express their sincere appreciation to the Rexburg Home Health/Hospice and care givers at the Briarwood Assisted Living facility.

Funeral services will be held Saturday, February 1, 2020 at the St. Anthony Stake Center, 247 East 4th North, St. Anthony, Idaho at 1:00pm. The family will receive friends Friday from 6:30 -8:00pm and on Saturday from 12:00 – 12:45pm both times at the church. Burial will be in the Riverview Cemetery with military rites provided by the St. Anthony Veterans and the Idaho Honor Guard.

The family encourages donations to the charity of your choice.

Condolences and memories may be shared with the family at flammfh.com