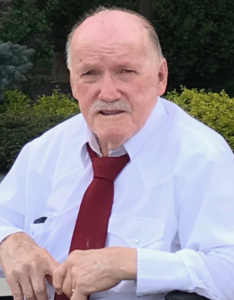 Ned Shelley was married to the love of his life, Sandra Lynn Cox, in the Manti Utah Temple on November 3, 1962. They spent 54 years together and raised 5 wonderful children.

Ned spent his childhood and teenage years in Mount Pleasant, Utah where he lived for 23 years. He attended Mount Pleasant Elementary and North Sanpete High School. After high school he earned an Associates Degree at Snow College and a Bachelor of Arts Degree from Utah State.

He and his young family then moved to Sunset, Utah where he and Sandra lived for 50 years. He was an art teacher at Sunset Junior High School for 32 years and walked to the school every day. Early in his career he created the original Sun Devil Mosaic that was displayed in the school for many students, faculty, and parents to enjoy for several years.

Ned was an active member of the Church of Jesus Christ of Latter Day Saints where he served in many callings including Bishop, Seventy, Stake Missionary, Young Men’s President, Elders Quorum Presidency and High Council. He was also part of the Sunset City Council. He illustrated children’s books, and created an award winning cartoon titled Mooford that ran weekly in the newspaper. He had many hobbies in his life which included art, fishing, history, cartooning, character artistry, wood working, chess, ping pong, horseshoes, writing poetry, and teaching his grandchildren how to play Dominoes and Chinese Checkers.

Ned Shelley passed away on February 21, 2020 surrounded by his loving family. Upon returning to his Heavenly Father he was released from his pain and suffering after many years of battling with Parkinson’s Disease. He is preceded in death by his best friend, wife, and companion, Sandra Lynn. His parents David Alexander Shelley and Geneva McArthur Shelley. His caring brothers, David, Blain, Dale, Darwin and Melvin. His loving sisters Margaret, Marion, and Betty. He is survived by his brother, Alan Shelley, and his 5 children, Doyle (Kristi) Shelley, Randall (Jeina) Shelley, Tana (Keith) Martin, Angela (Rodney) Keyes, and David (Irene) Shelley. He is also survived by his 18 grandchildren and 13 great-grandchildren.

Special thanks to Family Tree of West Point, Healthwatch and Brio Hospice for their compassionate, loving care that they provided to Ned in his final years. Any memorial donations should go to the University of Utah for Parkinson’s Research.