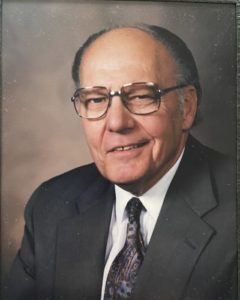 Don Lee Lawson, 91, husband, father of three, grandfather of nine, and great-grandfather of 28, returned to his heavenly home on March 14, 2020. He passed peacefully in his sleep at his home in Brigham City, Utah.

He was born on September 20, 1928 in Hedrick, Iowa to Warren Lee and Rosalie Fern (Coon) Lawson. Don and his brother were primarily raised by his mother’s parents, John Alva and Olive May Coon, and spoke of many fond memories growing up with his grandparents.

As a teenager, Don participated and excelled in many athletic activities, including football, track, and basketball. He attended Storm Lake High School in Storm Lake, Iowa and graduated in the Class of 1946.

After graduating high school, at the age of 17, Don began military service in the United States Army and supported post World War II reconstruction in Okinawa, Japan, traveling there on the USS General Patrick vessel.

Upon his return to Iowa, he met and married the love of his life, Lucille (Huxtable) Lawson, on May 12,1949 in Des Moines, Iowa. Don’s career centered on banking and finance, which for a season brought Don and Lucille and their three children to Santa Ana, California. It was there his family was baptized into the Church of Jesus Christ of Latter-day Saints on October 27, 1962. The next year they moved to Brigham City, Utah and were sealed in the Logan Temple on December 18, 1963.

Upon moving to Brigham City, Don helped pioneer America First Credit Union’s growth in the state of Utah, first opening the Hill Air Force Base branch. He also opened and was president of the Brigham City America First Branch for several years. At the time of his death, he was enjoying his retirement in Brigham City.

In addition to his professional accomplishments, Don was first and foremost an honorable and loving family man. He often put his family’s comfort ahead of his own. He had great interest in classic automobiles and maintained an impressive model car collection. Don also continued his love of conducting an active lifestyle and was often seen walking many miles in older age around his home in Brigham City. Don is loved and respected by many to be a man of character, strength, and great patience.

Funeral services will be held Thursday, March 19, 2020 at 11:00am at Myers Mortuary Chapel, 205 South 100 East, Brigham City, Utah. A viewing will be Thursday from 9:30 – 10:30am at the Mortuary. Interment will be in the Brigham City Cemetery with Military Honors Accorded.