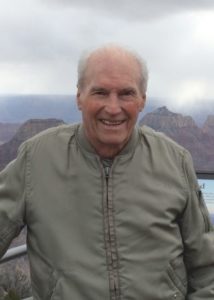 Deloy was a devoted husband, loving father, adoring grandfather, and friend to many. He was a beloved and likable man who will be dearly missed.

From a young age into college he milked cows and put up hay on his uncle’s dairy farm. He told stories of waking up on cold Cache Valley mornings where the snow would crunch under his feet on his way to the farm. As a Logan High Grizzly he played right half back for the football team and recalled fond memories including playing in the State Championship.

After graduating from Logan High School in 1948 he attended Utah State University on an athletic scholarship where he played football and ran track. While in college he discovered and “got hooked on golf,” a sport that played a major role throughout his life. Deloy was full of adventure and had a competitive spirit. A favorite story includes a sports marathon day where he and a friend started the day skiing at Beaver Mountain, played nine holes of golf, 25 games of ping pong, 3 games of bowling, and ended with 5 games of pool. He was a member of Sigma Chi fraternity and graduated with a Bachelor’s degree in Agronomy.

Deloy served in the US Air Force as an aircraft controller at Panama City, Florida, Cape Cod, Massachusetts, and Myrtle Beach and Charleston, South Carolina. He had a love for our great nation and served proudly. After his military service he moved to Southern California for two years and worked nights at an aerospace company so he could play golf during the day.

He returned to Utah and began his career in the golf industry combining his degree in agronomy and his love for the sport. Deloy spent the early part of his golf career applying his expertise to construction of Willow Creek Country Club and Hill Field Golf Course. He was the Golf Course Superintendent at the Salt Lake Country Club from 1965 until he retired 30 years later. A distinguished leader and pioneer in his field, he served twice as President of the Golf Course Superintendents Association, Utah Chapter (1966 and 1974) and received the Utah Distinguished Superintendents Award in 1996 after retirement from The Country Club. He was also selected as the PGA, Utah Section Superintendent of the Year in 1994.

In 1961, Deloy married his sweetheart, Carol Reed in the Salt Lake Temple. They went bowling on their first date and continued to bowl in leagues throughout their marriage. An accomplished bowler, he competed in tournaments in his younger days and bowled just weeks prior to his passing. Married 58 years, Carol frequently said her husband was, “as nice as he is good looking.” Deloy and Carol raised two daughters and loved nothing more than being involved in all of their endeavors. He never missed a game, a daddy-daughter night, or anything to support his daughters and grandchildren. As a family man he enjoyed boating trips, travel and activities such as skiing and ping pong with his girls. For him it was simply about being together. He was always eager to lend a hand, teach and empower those he loved. He enjoyed traveling around the country, especially visiting his grandchildren in Southern California, and trips abroad with his family. Locally, he made daily visits to feed his grand fur babies.

While a quiet and humble man, he always had plenty to say when it came to sports and cars. He was an avid fan and vocal observer of all televised sports. His extended family included several vintage and classic cars. He was mechanical and could fix almost anything.

A member of The Church of Jesus Christ of Latter-day Saints all his life, Deloy had a loving relationship with his Heavenly Father and served his church in several leadership positions. He embodied many fruits of the spirit including love, patience, gentleness, goodness, honesty, and faith. His soul was as sweet as his “sweet tooth” and the “goodies” he loved to devour. He couldn’t get enough brownies, cookies, ice cream, pie, cakes and his mom’s rice pudding.

The family will be planting trees to honor his connection to nature. If you would like to support this tribute, visit A Living Tribute to plant a tree in Deloy’s name.

Condolences and memories may be shared with the family at dignitymemorial.com