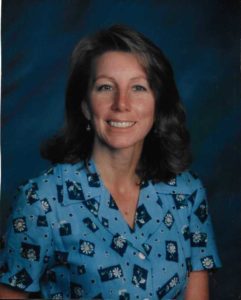 Debbie was born on December 27, 1955, to Stanton Leroy and Virginia Hammond Casteel in Pocatello, Idaho. But the family soon moved to Providence, Utah, where Debbie grew up as the second eldest of six children.

Debbie graduated from Sky View High in 1974, and met her eternal soul mate, Chris Larsen of Tremonton, Utah in the spring of 1975 while she attended Utah State University. Debbie had much to do with Chris deciding to serve an LDS mission, and when he returned, they sealed their love and established the foundation of an eternal family in the Logan Temple.

As Debbie brought their three children into the world, Davin, Yulese, and Jentry, the full spectrum of her motherhood skills blossomed, as she simply glowed in the role of a mother. Debbie was clearly the strongest influence for good in their lives as they grew, teaching them to read well before they started school, and involving them in so many fun, interesting, and beautiful experiences for which she was always on the lookout. Debbie had a particularly strong love for camping and spending time in the outdoors, which led to her family’s shared love of Yellowstone Park, where they vacationed nearly every summer.

Debbie was a very skilled seamstress, and made beautiful, lacy diaper bags which she sold for years through Mormon Handicraft in Salt Lake City. But she had a very giving heart as well and gave every new mother in her ward one of these bags as a gift. Even after Debbie was diagnosed with dementia, she simply did not let herself wither away in worry, but stayed productive, sewing, tying, and donating over 350 baby quilts to Primary Children’s Hospital, which act demonstrated so clearly the selfless spirit that she was.

Debbie loves the Lord, and as a devoted member to the Church of Jesus Christ of Latter-day Saints, she served well in many church callings, including ward Relief Society President, counselor in the Stake Young Women’s Organization, and teaching in the Primary. She won the hearts of all she associated with, by loving them, which was simply her nature. She had a particularly evident love and caring for those who had special challenges and the elderly. She regularly visited many members of her ward for whom she had no official assignment to serve, but whom she felt “would enjoy a visit,” and usually had a plate of her delicious Danish raspberry cookies for them.

Debbie was a highly self-motivated soul who completed a bachelor’s degree in Social Work from Weber State at the age of 51, while working full-time for Volunteers of America. Debbie was more a listener than a talker, was accepting of everyone, and made the world a better place through constant acts of kindness. She will be greatly missed by all who had the privilege to know her.

Services will be live-streamed by going to www.lindquistmortuary.com.

The family wishes to express its sincerest gratitude to the nursing and support staff of the Sunshine Terrace Nursing Home in Logan, Utah for the incredibly loving care that they provided to Debbie for the final 4.5 years of her life.