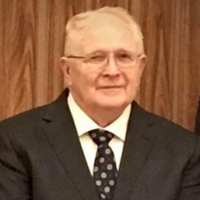 He was born September 29, 1937 in Logan, Utah as the fourth child and only son to Wallace Alvin Fjelsted Loughney and Lucile Scholes Loughney. His mother passed that same day with his father passing several weeks later. At the age of 2 he was sent to be raised by his mother’s sister Abbey Godfrey and H.E. Godfrey in Snake River, Idaho.

After serving a two year mission to French speaking Canada, David met and was married to JoAnn Southworth on August 5, 1960, in the Idaho Falls Temple.

After many careers and moves, including three years teaching for the church educational system in Western Samoa, and raising 11 children, he retired from teaching in Nevada and David and JoAnn served several missions , the first one to Costa Rica for two years.

He is preceded in death by his parents, his sisters Virginia and Mary, his wife JoAnn, his granddaughter Dawna, his son-in-law Craig Williams, and his daughter Janalee Martin.

David’s life was fulfilled by learning and teaching anyone seeking knowledge. He dedicated his life through many callings he had with the Church of Jesus Christ of Latter Day Saints. He loved serving in the Temples.

Interment will be in the Norton Cemetery, in McCammon, Idaho.

Condolences and memories may be shared with the family at Baxter Funeral Home.