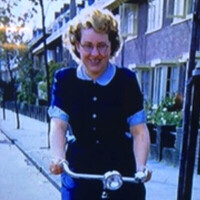 Cecil was born February 18, 1929 in Driggs, Idaho a daughter to Carl Adolf and Alena Daniels Ripplinger. She was raised in the Bates area graduating from Teton High School. She then attended Utah State Agricultural College graduating with a Bachelor’s degree in Physical Education minoring in Horticulture. She taught one year of school in Arimo, Idaho.

She married Elliott B. Olsen in the Salt Lake Temple October 8, 1954. She worked at Fayes Drapery Shop in Yuma, Arizona. Cecil was a member of The Church of Jesus Christ of Latter-day Saints and served on many genealogy missions, two foreign missions and three home missions. She was a member of the Daughters of the Utah Pioneers, She worked in scouting attending Wood Badge in scouting and teaching the Blazer B boys. She also served with the girls at girls camps. She enjoyed scouting, reading and sewing. She also taught swimming lessons at Green Canyon.

She was preceded in death by her parents, her husband, one sister, three brothers, one grandson and one great-granddaughter.

Condolences and memories may be shared with the family at Eckersell Funeral Home.