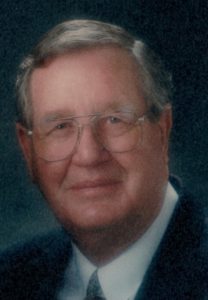 He was born on May 17, 1930 at the family farm in Winder, Idaho. He was the first child of Orene Lamb Johnson and Glenna Cordingley Johnson. Coming from humble beginnings, in which his parents instilled in him at an early age the value of hard work, which he passed onto his children and grandchildren. He helped take care of the horses and cows, and learned how to milk the cows by hand

He attended school in Winder, Preston, and Dayton Idaho. Graduated from Westside High School in 1948. He received his mission call in October 1950, to serve in the Southwest Indian Mission. During this time, he had many spiritual experiences.

In the further pursuit of his educational endeavors, Calvin attended Utah State University and earned a Bachelor’s in Dairy Production.

He was united in marital bliss at the Logan LDS Temple, to a wonderful, and beautiful girl – Clara Joy Bowden on June 6, 1956, who was destined to be his best friend and eternal soulmate, for 64 memorable and glorious years! Together they had four sons, two daughters, as well as a foster Navajo son.

His first job was as a dairy herder in Craig, Colorado. He moved to Utah and worked as a Dairy Herdsman at Utah Industrial in Ogden. In February 1965, he purchased a Drive-In business in Riverdale and named it Johnson’s Root Beer Stand. In 1970 he changed the business to a flooring business, The Carpet Hut, and then later The Floor Store

He lived in Riverdale, Utah for over 50 years. He was involved in community service, he served as the Precinct Chairman, Legislator Chairman and State Delegate for the GOP. He belonged to the Riverdale Lions Club and was a member for over 50 years. He has been involved with several service projects with the Lions over the years. He was awarded the highest award given by the Lions Club for humanitarian services – The Melvin Jones Fellow Award.

He was an excellent father who always watched over and looked for ways to help his children. He taught them the value of work, and the value of believing in themselves. They always knew of his love and support that he had for them and his posterity. He had an immense love for his grandchildren, and great grandchildren, he was proud of their accomplishments, and always encouraged them to be their best.

He loved to travel with his wife and family, they had many wonderful experiences. He also loved sports and reading.

He had many callings in the church of Jesus Christ of Latter-Day Saints, which included the Bishopric, Sunday School President, and Assistant Stake Clerk.

His greatest and happiest spiritual experiences were that he had the privilege of being called and served four missions: The Southwest Indian Mission, Riverdale Stake Mission, Service Missionary in Ogden, and a Senior Mission with his wife to Nauvoo, Illinois.

He was preceded in death by his parents, a sister, Karen Johnson, and three brothers, Jerry, Wayne, Rene Johnson.

Calvin’s family would like to give a special thanks to Inspiration Hospice: Carol, Rosa, Rick, and Deborah. They were his angels with the loving care they gave and showed him.

Funeral Services will be live-streamed and may be viewed at the “Myers Mortuary & Evergreen Memorial Park” Facebook page and at the bottom of Calvin’s obituary page, starting at 12:00 noon.

In lieu of flowers, the family has requested donations be made to the charity of your choosing.

Due to COVID-19 restrictions, precautions, we ask for masks to be worn by those who attend. Please also adhere to social distancing practices. If you have any symptoms, please respect the health of others by returning home and calling upon the family at another time..