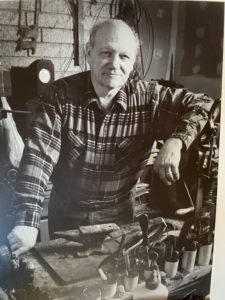 Bernard Sparks left his earthly family to join his Heavenly Father and eternal family early on the morning of Father’s Day and his 89th birthday.

He was born June 21, 1931 to Albert Orson Sparks and Sarah Louetta Dayton in Dingle, Idaho. He passed away peacefully in his sleep at the home of his daughter, Monique Sparks Flake in Montpelier, Idaho.

Bernard was born on the longest day of the year. As a child, growing up he loved that because he thought he could enjoy his birthday a little longer than any other day of the year. He got the very most out of every day even to the end. He always had a project or something fun planned out the night before for every day he lived.

Growing up, he was his Dad’s shadow. He went with him everywhere. From fishing streams, hunting in the sagebrush hills, accompanying his father on Deputy Sheriff duties to his Dad’s cattle sales in the billiard hall or boxing demonstrations at the Moose Lodge, he and his dad were constantly together. Those years were the springboard for his many of his interests and talents.

He was drafted into the Army during the Korean War, where he served as a rifle qualifications trainer. Since many draftees had never shot a gun, his skill helped to preserve many lives. He was honorably discharged in 1955. He returned to ranching with his father until his father died in 1962. He also built homes and worked in building construction until he started college at Utah State University.

He graduated with his Bachelor’s Degree in 1971. He began teaching school at Montpelier High School in fall of 1965. Over the next three decades, he taught many of Bear Lake Valley’s young men and women wood shop, art, drafting, and later computer aided drafting. In 1967, he began making knives part-time.

When he retired from teaching at Bear Lake High School in 1996, he began a 23 year full-time knife making and engraving career and made his last knife in the spring of 2019. Over the decades he made several thousand knives. No two knives were exactly alike, each one was a custom piece of art.

Bernard helped form the Knifemakers’ Guild in 1969. He was on the board of directors of that national organization, which today has 300 members and several thousand collectors. His death marks the last of the original founders of that organization.

The public is invited to attend funeral services at the Bernard Sparks’s residence, 115 East Center Street, Dingle, Idaho June 27, 2020 at 11:00am. Family will gather to greet attendees from 9:45 – 10:45 prior to the services. Interment will follow at the Dingle Cemetery.