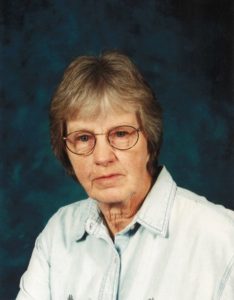 She was born on February 28, 1933 in Sacramento, California, a daughter of James Carlton and Lottie Mae Gilbert Hall.

BJ worked at Southern Pacific Railroad in California and transferred to Utah. After working for the railroad, she worked at Iomega in Roy, as a trainer. She retired after 16 years with the company. After retirement, she worked through the Easter Seals at Bunderson Elementary as a Tutor.

She was a member of the Methodist Church and also the Eagles Lodge #2472.

She loved to work with animals, ceramics, crocheting, volunteering at the Brigham City Senior Center.

Surviving are two sons, Rusty L. Roberts and Race L. Roberts, numerous grandchildren and great grandchildren.
She was preceded in death by her parents, her husband, Leonard, one brother and one sister.

It was BJ’s desire to be cremated and no services will be held at this time.