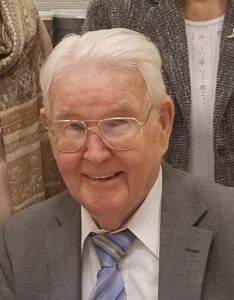 He was born on April 5, 1926 at the family home in Clarkston, Utah to Andrew Heggie Griffiths and Lydia Adline Godfrey. He attended school at Clarkston Elementary and graduated from North Cache High School in 1944.

After leaving the Navy they moved back home to Clarkston, Utah. Later they moved to Trenton, Utah, Powers, Oregon and Ogden, Utah and settling in Washington Terrace where they lived since 1952. He retired from Hill Air Force Base in 1982 after 34 years of service.

He enjoyed gardening, running, camping and spending time with the Iron Horse Motorcycle Club. He had a green thumb and grew beautiful roses and many varieties of gladiolas he shared with neighbors and often provided for the chapel on Sunday mornings and sold some to the local floral shops.

Asael was an active member of the Church of Jesus Christ of latter Day Saints where he served in many callings. He was called to serve as the Bishop in the Washington Terrace 7th Ward and in the Washington Terrace 11th Ward. He was a High Priest Group Leader, Sunday School Superintendent, and served as counselor in two different Bishoprics. He also served as a member of the Stake High Council. He served 3 missions for the Church with his wife Pauline in Australia (1983-1985), Philippines (1992-1994) and Boston, Massachusetts (1995-1996). He was also a temple ordinance worker. He often shared his testimony of the gospel with his family and grandchildren and taught them the importance of reading the Book of Mormon.

He loved family reunions with his children and grandchildren as well as gathering with his own siblings where he always had interesting stories of his life to share.

The family would like to thank the caretakers at the Sunridge Assisted Living Center as well as the Envision Hospice caretakers for the compassionate loving care they provided to Asael for the past several weeks.

The family suggest rather than flowers to donate to the Church Missionary Fund and the Humanitarian Center.