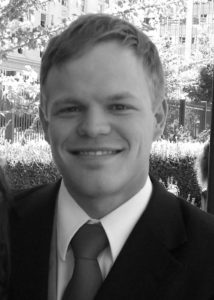 He attended Snow College where he was active in Student Government. He cherished his time there, he was a True Badger, and he embodied the spirit of Snow. He went on to Utah State University earning his Bachelor’s degree in Sociology with a minor in Business and Sales.

He was a talented self-taught Spanish speaker and did a study abroad in Peru. He worked as the Executive Director of Bridgerland Literacy, for various companies in sales positions, and as a shop manager for a small engineering company. His goal was to someday work in the non-profit sector.

Alex was a man of faith and a devoted member of The Church of Jesus Christ of Latter-day Saints. He served a Service Mission at the Provo MTC. He also served a Full-Time Mission in the Oklahoma, Oklahoma City Mission. He spoke fondly of his mission and stayed in close touch with several missionaries and Oklahoman’s throughout his life.

Alex married his best friend Laura Colleen Hull September 11, 2010 in the Salt Lake Temple. He picked September 11 so that he and Laura could bring more joy to that day (and so they could remember their anniversary when they got old). Alex and Laura were perfect for each other, they loved the same things and were always on the same train of thought. Alex adored his children and loved spending time with them. His two sons looked up to him and could be seen mimicking the actions of their Dad. He was so proud when his daughter was born and he talked often of his devoted love for her.

Alex was physically small of stature but he had a larger than life personality and was truly one of a kind. He would burst into song at random moments and sing way too long and way too loud. He loved to dance at home and at the Western Swing Hall in Ephraim. He was a master of puns and dad jokes. He was kind, light hearted, and unafraid to be himself in every way. His smile was huge and infectious. He had a passion for building and restoring bicycles, tinkering on his favorite cars, fishing, and woodworking. He had many dreams and aspirations that would have made the world a better place.

Alex had the purest heart of anyone. His focus was always how to help others. He made a friend of most everyone he met. Once you had the privilege of knowing Alex, he would tell you his life story and you had his listening ear and helping hand for life. No matter what difficulties life threw at him, Alex was ready to take them on. He had an unconquerable spirit. If Alex were here now he would crack a joke and find a way to move forward with hope.

He was preceded in death by mother-in-law J. Ann Hull; grandparents: Fredrick and Dorothy Roberts and Morris and Ella Rae Stoddard.

The family would like to give special thanks to his work family at HyPerComp and the many family and friends that have supported them during this tender time.

In light of recent world events, funeral services will be limited to a Graveside meeting. Close family and friends are invited to attend. Services will be held Tuesday, March 17, 2020 at 11:30am at the Hyde Park Cemetery, Center Street and 4th East, Hyde Park, Utah.

In memory of the love Alex had for the outdoors and picnics, please bring your own sack lunch and blanket or lawn chair to enjoy a picnic and mingling at the beginning of the service.

Despite these limitations, if you consider yourself a close friend to Alex please still come! He loved people and would love for a joyful gathering to take place in his honor.